From tiny Hummingbirds to the mighty Cotopaxi - Roadtrip Ecuador.

I step closer to the small sign. There is a picture of a mountain with plumes of smoke and a person running away. “Evacuación a Control Norte” (“North Control Evacuation”) is reassuringly written underneath. I glance up at Cotopaxi. The icy peak with jutting snow chutes beneath are wrapped in dark clouds. Rain clouds. Hopefully.

At an elevation of 19,349 feet, Cotopaxi in Ecuador is one of the tallest active volcanoes in the world. I take photos. Of the sign, too. My secret plan: When this piece of mountain erupts, I'll just stick my memory card into my sock, throw my heavy camera into the burning lava, and run to the north checkpoint so I can send pictures to my grandpa later with the caption, "Cotopaxi volcano eruption, holy shit, look at how I am standing right next to it."

And Cotopaxi is not the only thing that is really impressive in Ecuador. Ecuador is a country where you can go from grass covered highlands to cloud forests in an hour, or from hot Amazonian climates to snow in the Andean peaks. That's what makes a cross-country roadtrip so exciting. That is, if you can survive the trucks blowing gigantic billows of blue exhaust as they pass you on the curves of mountain roads, in fog with only 10 feet of visibility.

Come along on a journey and visit tiny hummingbirds, huge volcanoes, a crater lake, a rocky passage behind a waterfall, and a hellish railroad track.

I stare at my offline map and then try to read the small plaque in front of a locked gate as we whiz by. "I think we just passed it," I say dryly.

We are in search of a hummingbird lodge. Ever since I screwed up visiting a hummingbird garden in Costa Rica, I've had deep feelings of a life missed. A life without hummingbirds. So, in nightly visits to the computer, my boyfriend researched hummingbird locations in Ecuador. He found a special lodge where the small, feathered friends supposedly appear in such masses as people with bad taste in music show up at Britney Spears’ concerts.

However, the lodge is not easy to find. On purpose—as it turns out. The owners want to keep the place open only to insiders. "We don't want busloads of tourists, so we don’t have signs. We only want visitors who have made a real effort to find us," says the lady managing the property.

We did find it, because I didn't want to let anything come between me and hummingbirds again.

Once inside the secret garden, we find several shelters where visitors can sit or stand to observe feeders. With silent, vibrating wings, red, orange, black and green tiny birds come flying in. Fast. As if they had been beamed in for a short time. And just as quickly, they disappear back into nothingness. I'm glad to be here. Hummingbirds at last—life can now go on once again!

Our next stop in Ecuador’s north country is anything but tiny. Cuicocha Crater Lake is almost two miles in diameter and is dotted by two small, green islands in the middle. Hmmm. That sounds a bit too peaceful to me, so I'll add that there are four lava domes lurking just under the islands’ surfaces. Despite the volcanic nature of the islands, the surrounding water is not warm—just so no one gets the wrong idea.

The name Cuicocha is derived either from Kuychikucha, which means “rainbow lake,” or from Kichwa Kuykucha. Then it would be a “guinea pig lake.” And if you were unaware, Ecuadorians enjoy eating guinea pigs.

The trail around the lake follows the crater rim. Mega views of the lake on one side and the green Andean landscape on the other.

Well the views are mega, IF you are not too busy trying to breath in the thin air. Because the Cuicocha rim tops out somewhere between 10,000 and 14,000 feet.

Therefore, despite various trips to the Bavarian Alps, my legs feel as if I were wearing a suit of armor like the tiny men in my grandpa's showcase. The good thing: If I can't send him photos of the exploding Cotopaxi, he can at least look at the men his glass cabinet.

A few days earlier I had to descend from a hike on a mountain near Quito, the second highest nation’s capital in the world, because I had slight symptoms of altitude sickness.

Sounds like I’m getting a bit leery about thin air, but that shit is real and it can also be dangerous if you go all John Wayne and keep hiking anyway. No Country for Old Women.

The Cotopaxi in all colors

Speaking of Cotopaxi, we are there the next day. It is like I said, everything is very close in Ecuador. We are going 80 as we pass a sign that says the speed limit is 60, while the locals seem to casually drift by us at over 100 by blowing a boatload of fumes on the air. And I mean that literally: if you don't die on the mountain precipice through totally wacky passing stunts on less-than-perfect roads, you at least get your lungs filled with dark, oily crap. Every Ecuadorian vehicle corrupts the air with dark and disgustingly smelly clouds of blue-black smoke. But surely we'll still reach the Paris Climate Accord goals. In 2076 or so.

As we turn off the Pan Americana highway onto a smaller road, I almost drop my camera in amazement. In the middle of the high, dark blue Andes, stands a white tower. Incredibly larger than anything else, powerful, and surprising: the Cotopaxi volcano. Never will I forget this monumental moment when it just suddenly materialized in front of us. Like a wall.

The entrance to the Cotopaxi National Park is free [October 2022], although you do have to register, and three quarters of the roads in the park are unpaved. But since we are often on the unpaved, rutted roads around the world, we take the risk. Rumbling on, we approach the Limpiopungo Lagoon. A lake close to the foot of the volcano. In the middle of the death zone, should it choose to erupt while we are there.

We are lucky. Cotopaxi chooses not to erupt during our visit, and for a short moment even the clouds move away from the summit. The yellow steppe, the reddish earth of the volcano, the white snow, the blue sky—wow. Just WOW!

If all this isn't adventurous enough, just head to Baños. The town is known (locally, if not internationally) as the action destination of South America, with zip-lining, river rafting, and bungee jumping. One translation of "Baños" is "toilets,” but it can also mean "baths." and the village, with its natural hot springs, has plenty of those. Unfortunately, the Google reviews about the hot springs make them sound worse than the 1970’s reviews about the rotten indoor pool in my home town in Germany. So let's leave that for now.

Instead, I make my way to Diablo Waterfall. Alone. Because my boyfriend has come down with the dreaded Montezuma's Revenge. A water-borne disease that often affects tourists in South America and makes it impossible to get more than five feet away from the "Baños". And I don't mean the hot springs.

Similar to many other attractions around Baños, the trail to the waterfall is quite touristy. Sales booths are everywhere, and the entrance is decorated with a relatively funny plastic monster. I'm not a fan of man-made amusement crap. It always feels like a dumbed-down kid's birthday party for adults with no imagination of their own.

Nevertheless, the waterfall is worth seeing. Thundering, it plunges into a cauldron filled with rocks and forms a ring-shaped rainbow!

If you crawl on your hands and feet through a low tunnel, you can even get to a ledge behind the waterfall. Of course, I have to do this. After all, YOLO. Now soaking wet from the spray, I stand with the tip of my nose against the roaring water. I have never been this close to a waterfall before—not even in Switzerland or Iceland.

Speaking of noses: Ecuador has—or rather had—one of the most spectacular rail lines in the world. The Devil's Nose Train near Alausi. A rail line traversing an almost vertical rock face. It is so steep that the train can only go up and down by means of a sharp zigzag, back-and-forth course.The cars go to one end of the track, stop, the track is switched, and the train goes up or down to the next level backwards. This repeated until the train reaches the top or bottom. Normal switchback curves are not possible.

Unfortunately, the train has been out of service since 2020 [October 2022]. As to why, Ecuadorians have different opinions. Some think "because of Corona", others "because the government is a corrupt mess". Maybe Bill Gates, Elon Musk, a flying saucer, or the Great Ghost of Cesar have something to do with it. Who knows? In any case, the train isn’t in operation.

Fortunately, you can hike up to the top of the Devil's Nose! The hiking trail is honestly even more spectacular than the railroad track because it's much higher. So high, in fact, that there are no trees growing. We sizzle under a scorching sun, hiking between brown fields, feeling like tiny hot dogs baking in the Sahara at the end of the dry season.

The views at the Nose, however, are spectacular. Not only do we see the zigzag tracks from above, but also three different canyons that come together at the top of Devil's Nose.

Everything does not always work out as planned, but in a country like Ecuador, you just drive an hour and you're in another world with a thousand new possibilities.

Before we started our Ecuadorian road trip, we experienced an unforgettable trip to the Amazonian jungle. What we experienced there, you can read here: 5 Days in the Amazon Rainforest: Adventures in a fragile World. 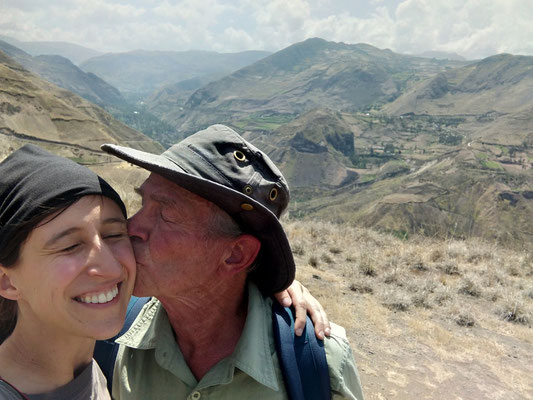 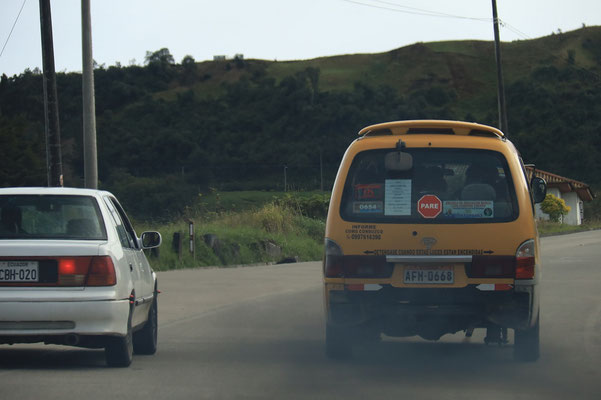 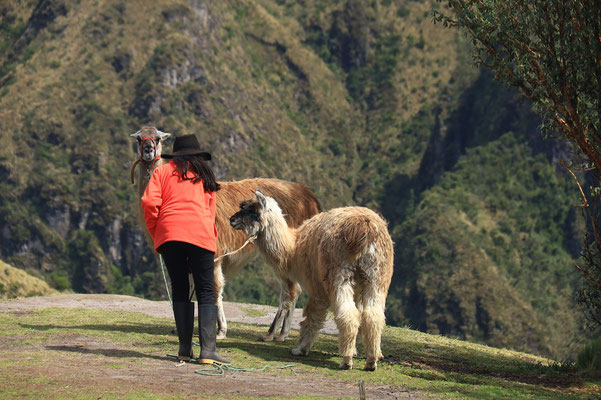 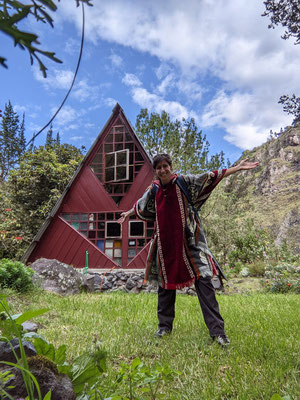