How wet do you get when you stand about ten feet away from the bottom of the booming, 200-foot-high Skógafoss waterfall? Blinking, I wipe my face with my hand. Almost immediately, my eyes are already full of spray again and I can't see anything. My jacket, my pants, my shoes, my hands, my smile—everything is dripping wet. But it doesn't matter if I see anything, or if I have to later hang my panties by the chimney with care to dry them (what would Santa Claus actually do at Christmas if I did that?). It's the roar, the unbridled power of nature, the icy drops, this monumental moment that counts. To be able to stand so close to such a huge waterfall, with no intervening railing, with no rope—phenomenal! I scream loudly. The water is louder. I love moments when we humans know we are very small and the world is very big.

We are on a two-week road trip through Iceland. After the first days in Reykjavik and at the Golden Circle, we are now traveling along the southern coast of the island. "Southern coast of the island" sounds like we are sipping drinks shaded with little umbrellas in a hammock under coconut palms, but in Iceland it means crystal blue glacier caves, diamond-ice beaches, and confronting a recurring nightmare of mine: life-threatening monster waves that suddenly appear out of nowhere.

Wet and pissed at Seljalandsfoss

"I booked a cabin with a volcano view," I explain to my boyfriend as we rumble down a gravel road filled with potholes and I study the Airbnb listing again. He looks out the window. It's drizzling and foggy.

"Where?" he asks sarcastically.

Iceland in the spring is not for fair-weather frogs. Iceland is adventure. As if to confirm my thoughts, we clatter over a particularly large pothole. Fortunately, we have a rental car with fully comprehensive insurance without deductible. As far as insurance is concerned, I am very German. I get it all.

The next day, the drizzle stops. Instead, the sky now pours water on us from buckets. "It's a good thing we're going to see waterfalls today. We would be wet anyway," I cheerfully say to my boyfriend before we leave.

The trip to Seljalandsfoss (the icelandic word for falls is "foss"), where you can hike a path that leads right behind the waterfall, still pisses me off. I love taking pictures. But when your camera almost floats away and you are only able to photograph blurry shit, your mood can dip below freezing, where the temperature of my hands currently resides. As I stand there with icicles where my hands used to be, I remember Seljalandsfoss summer sunset photos I had seen on the Internet. Memo to myself: Don't look at too many (heavily edited) Google photos before seeing the reality. When I arrive, shivering, back at the car, my boyfriend goes back out in the rain and buys me a hot chocolate. He knows it always helps.

Only a few miles later, we arrive at Skógafoss, where the rain has lessend, and I have mentally said goodbye to all Google photos. Instead, I now stomp, determined to enjoy the day, directly towards the huge, wide waterfall that was once right on the Icelandic shore but is now over three miles inland. In Iceland, everything is constantly changing. Volcanic eruptions, glaciers, tectonic shifts, receding shorelines. It's a land that moves, scrapes, explodes, and never rests.

Rather than continuing to complain about non-existent sunsets, I close my eyes and try to feel everything around me, while allowing myself to get as wet as if I were standing in heavy rain. Personal attitude often determines a good or bad mood. Which then turns into good or bad memories. And I'm not in the mood for bad memories.

Still, there is one moment during our Iceland road trip when I face bad memories. On the black volcanic beach of Reynisfjara. For some unknown reason, I've had a recurring nightmare for years: I'm standing on the beach, everything is normal, and suddenly there's a giant wave and I'm stuck in the sand and can't get away.

Reynisfjara Beach is the personification of this nightmare because it has so-called sneaker waves. Waves that suddenly, unexpectedly, and so far without scientific explanation, can be more than twice as high as any before. Sounds like a bad killer shark movie, but it is a true phenomenon where real people have died at this site.

The fine, black sand is almost as powdery as ash. The first thing I see are massive and totally surreal basalt columns jutting into the middle of the beach. These columns form when lava cools rapidly into basalt that then cracks into hexagonal posts. The whole thing looks like a postmodern work of art from the Guggenheim Museum. But it is nature. I run around wildly shouting, "I must be on Mars! This can’t be Earth!" I do that sometimes when I can't believe how extraordinarily wonderful our world is.

But then I also see the huge waves crashing, white and angry, on the beach. If these many-feet-high waves, are the normal waves, then what are the dangerous sneaker waves? I feel queasy and for the rest of the time on the beach, I walk around with a bad feeling in my stomach. Everything looks like it did in my nightmares. Maybe I'd better go to the car?

No, I will NOT go to the car. I will take the potential danger seriously, but I will not run away from my fear. From a safe distance, I watch the roaring sea. And indeed, there are occasional waves that are clearly higher, more powerful, and more destructive than the others. They rush onto the beach faster and farther than the others. And they would drag anyone with them who had his foot in the wrong place—no doubt about it.

As we walk away, I feel glad that I went to see Reynisfjara Beach. I even take some sand with me as a souvenir. A good memory.

Because Iceland thinks all this isn't spectacular enough, two days later we are on an off-road tour through scree left behind by the receding Vatnajökull glacier. Vatnajökull is the largest glacier in Europe outside the polar region. It currently covers over 3,000 square miles and is 1,250 feet thick on average. In comparison, the Eiffel Tower is about 1,100 feet high. So you could pave the entire Tower under the glacier if you wanted to. I don't know why you'd want to, but you'd still have 150 feet of space above it. Or ice.

We're on our way to the Crystal Blue Ice Cave. A natural cave in the glacier. And the cave is even more spectacular than its name. A glowing blue grotto with a turquoise glacial river opens beneath the dirty white snow cap of Vatnajökull. Like a stained-glass window through which the sun shines. Except that—of course—the sun isn't shining. But the glacier seems to shine on its own, while at the same time I feel like I'm inside a giant, blue resinous piece of amber, whose walls feel like ice-cold honeycombs. "This can’t be Earth!" I say, for the second time during this trip.

Back outside, we survey the nearby Jökulsárlón Glacier Lagoon, where bright blue icebergs float like small freighters. Fascinatingly beautiful!

Diamond Beach: Glitter on the beach and ice needles in the face

Not far from the cave and the lagoon is Diamond Beach, whose appearance results from the glacier. This is because the glittering "gems" on the black beach are ice fragments of icebergs calving off the Vatnajökull. In the meantime, a nasty ice storm also sets in, driving tiny snowflakes like pinpricks into my face. But the diamonds are too beautiful to simply leave without examination. I am counting on finding a hot chocolate later.

The ice clunkers lie pointy and defying the weather in the cold, wet sand. Some are grabbed by the water, where they melt, or they are spewed out again in new shapes. As soon as you touch them, they begin to melt. A transient miracle.

When my boyfriend stops to study some geological charts, I point the frozen stump at the end of my arm in the direction of the car. I'd like to say something, but I have a feeling my lungs will get freezer burn if I breathe in too deeply. I hope my eyes don't freeze shut before we get to the parking lot.

Luckily, they're open enough, even if they're watering like crazy, to realize that there's hot chocolate available in a small stand next to the parking lot. Hallelujah. Unasked, my boyfriend buys me a cup. Not because he always does this, but because my hands are too dead to find my wallet in my pocket.

Iceland is not something you feel with your hands, but with your heart.

You can find the first and the last part of our road trip through Iceland here:

Street Art and a Geyser-Shower: Reykjavik & the Golden Circle—Roadtrip Iceland I 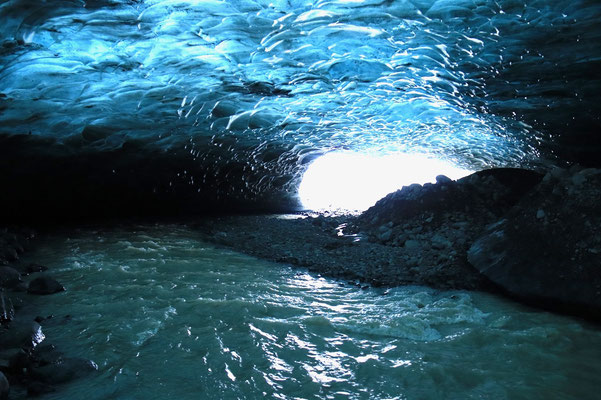 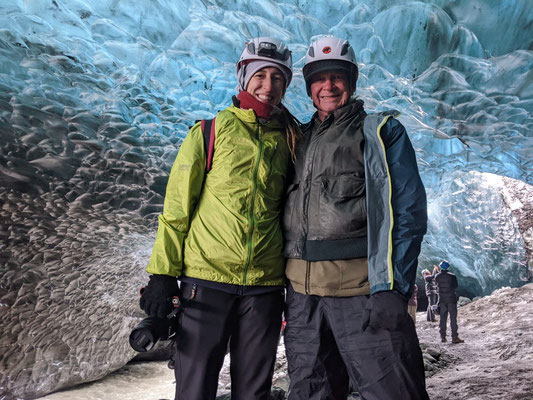 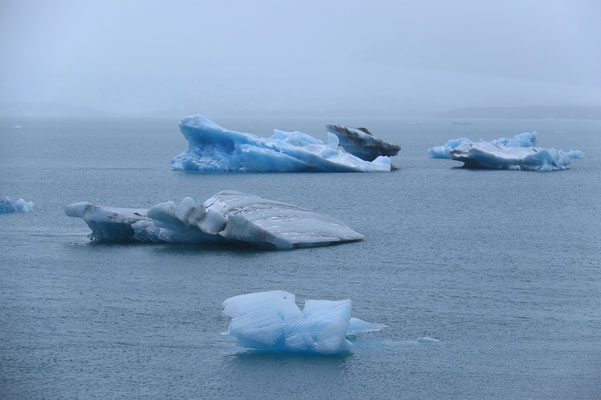 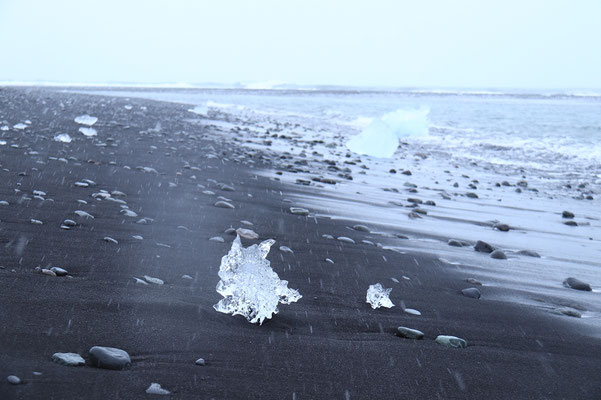