A Giant's Kettle and an Island in the Alps – Roadtrip Switzerland I.

The sun is almost popping out of the sky, and we are zipping down Germany’s A5 Autobahn towards Basel, Switzerland. For weeks we have been spying on the German Foreign Office to keep up on the ever-changing travel and corona requirements for driving to Switzerland. On the day of departure, we still have a green light: those who arrive by private car from North Rhine-Westphalia, where we live, do not need a test or a quarantine [as of March 2021] when they enter. Let's go!

However, for a sensible road trip through Switzerland, regardless of where we are coming from, we need a toll sticker, called a vignette, to drive in Switzerland. We march into the last gas station before reaching the border, where you can buy the window decal in advance. I am not quite sure how this works, but I am good at embarrassing myself with big grins while on trips.

"Hi, we need the sticker," I say. "Um ... I mean the vignette." For a moment I am not sure whether I accidentally said Viennetta. Like a the famous German ice cream. But it does not really matter, because the guy at the cash register speaks some undecipherable southern German Schwitzer dialect, so it is all Greek to me, and my boyfriend speaks only English. Nobody fully understands anything the others are saying, but in the end the sticker somehow winds up on the windshield. We are ready to go!

Two weeks of road trip through Switzerland! Now comes the tale of the first part of our journey, from a surreal fountain in Bern, to medieval street art in Lucerne, to a gorge with one eye.

The very first thing that strikes me as we enter Bern: Switzerland is old. Older even than my boyfriend. Whoa! But 400 years of peace show how beautiful a city can be if it is not senselessly bombed during some stupid war and then nicely reconstructed.

The nut-brown wooden frames on the shop windows of the chocolate factories shimmer elegantly in the morning light. The curved metallic handles on the front doors, the red and gold painted fountains, the small cafes in the basements, and the thick, stone facades we find everywhere could all tell stories from many centuries. Stories about the people in the city, about the rattling tram, about the good food, and about the green Aare River that flows through the valley at the bottom of the city. As I gaze at the city’s Astronomical Clock, the Zygote, a chicken figure waves its angled wings and crows a noise that is something like a tinny, broken Santa Claus.

While we wander through the old town streets, my boyfriend keeps asking me to translate crazy signs like “Käsli” or “Stüberli”.

"In Switzerland everything is -li," I say. "Small."

And that is true. You can easily see Bern on foot in one day. If you can manage not dashing into every chocolate shop. But the Swiss prices keep us from doing that. I briefly wonder why the shop window shows the amount of its monthly rent, but then I realize that it is only the price for 3.5 ounces of Swiss chocolates.

As a special tip if you travel to Bern, you need to see the almost surreal Meret-Oppenheim-Brunnen fountain, which is overgrown with limestone sinter and moss. It is a true living fountain. You can find a photo of it further down in my gallery.

The house by the lake, the car on the slope

From Bern we chug off to Lucerne, where we have booked a wonderful vacation home overlooking a lake. The view over the water from the rustic beechwood balcony is spectacular. The weather sucks because of the low ceiling, but it is just high enough to spot a few mountains. In the middle of the water is an island with a ruin.

While my boyfriend is loading the luggage from the car, which is on a precarious slope with a 190 percent incline, I tear open the balcony door and shout out loud to the world: “And at the end of the street there is a house by the lake. Orange tree leaves are on the way!” A German song that was very popular years ago. The ducks in the pen below begin to chatter excitedly. Probably only boring seniors ever stay here.

When my boyfriend finally shows up again, I ask, "Where have you been all this time?"

He just innocently begins to make himself a cup of coffee.

Shortly afterwards, when we begin to walk through the village, I see that he has secretly moved my car that I had parked in my usual somewhat shoddy manner. It is still on the 190 percent steep slope. But it is not as crooked, nor is it half in the roadway, as it was before.

I look at my car. Then at him. Seriously. “... therefore you cannot shift gears!” I say. Then we laugh.

Lucerne: a city as a canvas

“Which lake are we passing now?” asks my boyfriend while we are merrily cruising along the road under the azure blue sky towards downtown Lucerne.

I have no idea why all German words seem to have 47.5 letters, but long words do not really help if you want to explain to your American partner what he is seeing.

The Vierwaldstättersee, also known as Lake Lucerne, lies at the foot of massive mountains where thin layers of clouds now hang. By the way: Have you ever seen the feet of mountains? Just saying.

Then we are in Lucerne, where we stash the car in a parking garage where it only costs three bars of gold per hour.

The only thing I knew about Lucerne by looking at photos was that there is a medieval Chapel Bridge with a round water tower. The bridge is the oldest wooden covered bridge in Europe. I am so excited as we cross it that I first must touch the thick wooden beams, some of which are littered with holes. The great thing about traveling is that you can even touch your enthusiasm.

From there we stroll through the city center, where we find that almost every building is painted with colorful figures: devils, roses, flames, masks, ornaments, and more. Painted in red, green, blue, gold. Street art from the Middle Ages. Not kitschy and religious like in Bavaria, but simply artistic and beautiful—it is like a living outdoor museum.

After that, we begin to talk longingly about ice cream until it begins to rain. Then we buy three scoops each and sit outside at an open pavilion on chairs by one of the empty, uncovered tables. Rudi Carrell, a Dutch entertainer, once did a skit about eating spaghetti at an outside table during a thunderstorm. We feel very much the same as we eat our ice cream. Something is wrong with us.

From Lucerne we go on to the Canton, or state, of Graubünden. There I picked out a cheap Airbnb, which the map showed was accessed by a very suspicious, very serpentine road. My gnarly red car—or "the little red sports car" as my boyfriend generously calls it—huffs and puffs its way up the mile-and-a-half-long, two-way, but one-lane, road with ten thousand switchbacks that have been carved into the side of a mountain. About half-way up, I take a look at the back seat to see if we happened to bring an oxygen bottle with us like they use for Everest ascents.

The reason for this stopover on our road trip is the Viamala Gorge, which is close to Switzerland’s oldest city, Chur. And we are going to hike the gorge the next day. All of it. Ten miles. Five-hundred-foot change in altitude. Eight hours. Three deaths.

We park the car at the train station in the little village of Thusis and take the bus to Zillis, another small village at the far end of the gorge from which we plan to hike back. The bus driver swivels around and thinks I must have the yellow fever when I show him where we are going and what we are planning. “Yes,” he says, “but that's the whole gorge!” He looks as if he had just choked on a wad of tobacco.

"Exactly," I confirm and my boyfriend nods, although the only thing he probably understands is “Vierwawawakrtschbrrr.”

Then we hike from Zillis over beautiful, green alpine meadows and past half-ruined wooden houses down the Viamala Gorge with its turquoise water. Waterfalls tumble down vertical rocks to the right and left. At one point we reach a special viewing area, where we descend carved stone steps and find a glacier pot, also known as "Giant's Kettle", that looks like a rotating blue eye. Glacier pots are roundish, shaft-like holes carved into solid rock that were created by centuries of swirling glacial meltwater that had been roaring downstream at speeds up to 125 miles per hour.

“What river is that?” my boyfriend suddenly asks while looking at the narrow stream. I take out my map. It is the Rhine. The Rhine! It is unbelievable that this narrow little stream will eventually turn into the wide, raging torrent of water at the Cologne Cathedral in Germany!

From there we climb to the top of the canyon. We hike over enormous tree roots and slick, muddy slopes to the Traversinersteg, a footbridge crossing a deep ravine on one side of the gorge. This unique suspension footbridge spans 180 feet from one side to the other, and it seems to hang a little crookedly as it crosses a stream some 230 feet below the two sides of the chasm. It looks crooked because it does not go straight from one end to the other, but rather it goes uphill! 176 steps with an altitude change of almost 75 feet, or almost seven stories in height. I quickly rush up some of the stairs, climb onto the railing, and throw my hands into the air. For a photo. Before we left Germany, we gave my grandpa a digital picture frame that is connected to the internet. I can now beam photos to him from anywhere in the world. If his television program sucks again tonight, at least he will be able to see a few exciting pictures of my escapades.

When we finally get back to the car that evening, I feel older than Bern and a bit bombed out. It has only been a week since we put the Vignette Sticker on our windshield—and I now can I feel every bone in my body. But I can also feel the whole, beautiful life here in Switzerland. 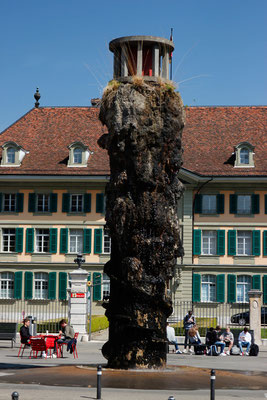 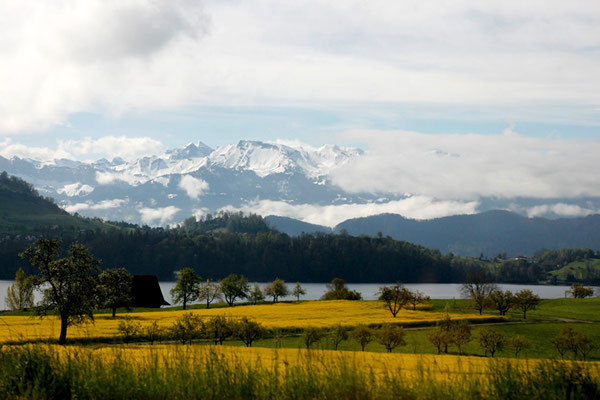 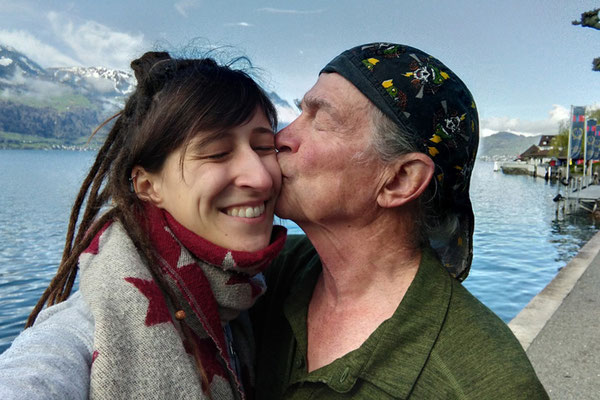 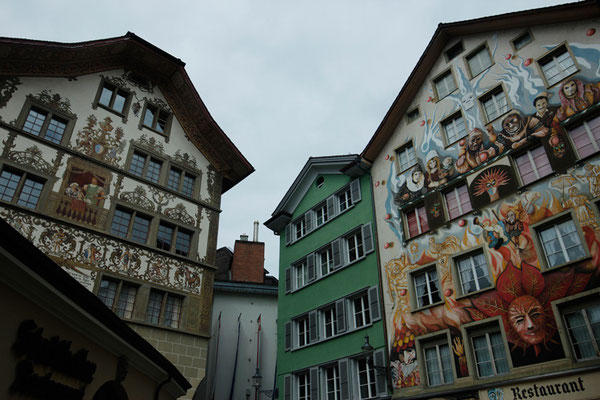