From white Dunes to the Milky Way to a Blizzard – Roadtrip Southwest USA III.

Completely exhausted, I twist the last tent peg into the cold sand. For more than two miles we have hiked with 25-pound backpacks over huge dunes. Now it is dark. My boyfriend has fired up our ultra-light gas stove and is making hot chocolate. I'm about to sit down when I look up at the sky and instantly stop in mid-motion. Across the velvety blue firmament, millions of stars pour out like an overturned saltshaker. And right behind our tent, the Milky Way rises vertically. Between the mountains, behind which the sunset still glows very slightly orange. "Oh my God, that's...great!", I exclaim aloud. Then I spin in a circle on the spot, throw my arms up and laugh. Of course, I fall over shortly after and land in the soft sand.

My boyfriend looks up. "I could ask you again what you're doing. But I'm afraid of the answer."

We are in the Great Sand Dunes of Colorado and on the last leg of our month-long camping and road trip through the southwestern United States. I'm taking you to a cave so impossibly huge you could sink the entire Empire State Building in it, a white gypsum desert, the largest sand dunes in North America, and a full-blown blizzard that trapped us in a log cabin for two days.

"You really have to see Carlsbad Caverns," my boyfriend tells me as we plan the trip.

"Yuk, caves," I reply less than enthusiastically, thinking of the small and barren dark holes I’m familiar with in Germany. But then, I am curious and open-minded for new and fun experiences. So the cavern is added to our travel list.

It's blisteringly hot when we get to Carlsbad, New Mexico, in early October. The thermometer in the car reads over 100 degrees Fahrenheit. That sounds like a magma inferno to someone who grew up with Celsius. But it's almost 40 degrees in Celsius, too. “Maybe it will be cooler in the old shaft,” I think to myself.

Then we stand at the entrance to Carlsbad Caverns. I stare at the information board. There's a picture of the Empire State Building, which is over 1000 feet tall - and how it looks like a chess piece in comparison in one of the cavern rooms, which is about 1,500 feet deep.

"I told you, this isn't just a stupid little black hole," says my grinning boyfriend.

From there, we spiral down into the depths. To towering stalagmites that look like ivory towers built for fairies, to reflecting ponds, and demonic-looking crevices in the ceiling from which stalactites sprout like nuclear residue. The Big Room in particular, 900 feet in diameter, looks like a cathedral built from a collection of fossilized sharks, mushrooms, and needles. 265 million years ago, all this lay beneath the surface of an inland sea. So far, 120 individual caves have been discovered in the system, with more yet to be found. Really cool: The formations are illuminated, and you're allowed to bring a tripod. We spend about five hours underground. So much for “old shafts.”

White Sands - into the gypsum dunes

From black depths to glistening snow-white dunes. Not made of classic sand, though, but of plaster crumbs—gypsum. Not far from Carlsbad Caverns is the White Sands National Park. But before we get there, we pass military fences, because the White Sands Missile Range is here as well. At one spot we pass a strange checkpoint on the highway. I hate checkpoints because I always think I've accidentally done something illegal that I don't know about. My boyfriend rolls his eyes, "Sarah, what do you think they are going to do?"

I don't know. Life imprisonment in Guantanamo, being shot to the moon, forced labor on Donald Trump's campaign team?

Of course, nothing happens.

By the evening, we are still visiting the truly snow-white dunes, where you can walk around without following established footpaths—if you figure out how to walk without stepping on the fragile plants. The bluish evening light is reflected by the white granules. The soft gypsum spreads out in front of us like waves. Barefoot time! It's a terrific place that can get excruciatingly hot during the day, and totally frigid at night. But this evening it's just blue, and golden, and the dunes seem to glow from within as the sun sets. Magical. This area was also formed underwater millions of years ago when gypsum was deposited on the ocean floor.

By the way, you can bring "sleds" and then slide down the dunes.

Shortly thereafter, we arrive at more dunes. The Great Sand Dunes in Colorado. “Shortly thereafter,” however, is in American terms, because the two national parks are 400 miles apart. For the common German this is a day trip, whereas my boyfriend thinks you take your first breakfast break after maybe 600 miles or so.

For a place to bed down, we booked a very special overnight treat: Backcountry camping in the Great Sand Dunes. For this you need a permit from the National Park Service and only a few people are allowed to camp there per day. And there is another condition: You must hike at least a mile and a half away from the parking lot into the dunes and across the largest dune crest to do so. The highest dune, Star Dune, is more than 700 feet high. We saddle up our 25-pound expedition packs onto our backs. They contain all of our tent equipment, food, and a ton of water. Because where we are going is just sand. No toilets, no showers, no drinking water, no electricity.

Even simply walking along an asphalted road with all this shit is not a nice evening walk. But to climb a crazy, 650-foot-high sand dune, where you sink in with sand covering your ankles with every footstep, ain't no fun. But that's not totally true either. Because the view over North America's largest sand dunes, which lie in the middle of a cauldron of mountains, is unbelievably fantastic. The fine wave patterns in the sand, the long, sharp shadows, the blue sky.

"I have ten inches of sand in my Crocs," grumbles my boyfriend, who usually never grumbles. For one brief moment, I think we are going to roll backwards down the steep dunes with our backpacks, like breaded potato dumplings.

The Universe so close

Finally, we reach the area where we are allowed to pitch the tent. Wild. There are no markings, only sand.

The sun is slowly setting, and the huge dunes are turning golden-orange behind us. There are red clouds low in the sky and in the sand in front of me I see very small tracks in kind of a rhythmic tripping pattern. Maybe a desert mouse. The total effect of just being here is overwhelming.

After we pitch our tent, we senselessly and happily, hand in hand, run down into a deep sand valley.

Of course, afterwards we have to slowly crawl back up again. "Who had this silly idea," my boyfriend says. "Especially when it's almost dark." We laugh.

Back on top, I screw the plastic pegs designed especially for sand more firmly into the ground while my boyfriend pours us both a hot cocoa. The temperature drops rapidly after sunset, and it is now uncomfortably cold. Tonight, it will go below freezing. Desert, Great Scott!

As I get up, I see the last of the pink fleecy clouds over the little tufts of grass atop the now gray dunes. The crescent moon has risen, and Venus shines brightly just to its right. And then suddenly the Milky Way arches over our tent. In a fantastically dark sky with countless white stars. Everything around us is infinite and we are just a flyspeck in the universe. All this would be there, even if we were not here. Something great to ponder.

We sit down with the hot cocoa on the cold sand. It is quiet. Completely quiet. And above us lies the universe.

On the way back to Wyoming, where my boyfriend is home, we plan to stop for a night at a remote cabin in the mountains. After all, it's over 620 miles from the Great Sand Dunes to his house, and my boyfriend is, after all, traveling with a typical German who doesn't do such long stretches in a single day.

The log cabin is at the end of a 10-mile-long gravel road. It is already dark when we arrive. The cottage has a fireplace, a huge warm bed, a bear skin rug on the floor and a bear head next to the door. I don't even ask if the decorations are real. I'm in Wyoming.

Snow is forecast for the next day. In the morning it is still a balmy autumn day, then thick clouds move in and suddenly it is deepest winter. Shortly after the snow begins, all interstates are closed. Well, all interstates is kind of a relative term in Wyoming, where only three people live. Anyway, all the roads are closed. We are snowed in. Our host tells us that if no one can get out, no new guests can come in. So, we extend our stay. Luckily, we have enough food in the car, because the nearest grocery store is over 30 miles away and, of course, it is snowed in. We let the fire crackle, read a book together under warm blankets, and cook ourselves decadent white wine spaghetti dinner. From over 100 degrees, to the frosty Arctic in only five days. Jules Verne's 80-day world is a shit compared to that.

This is the end of our month-long road and camping trip. A trip that hovers near the top of my life’s travel highlight list. At least so far.

Find out more about the thousand hoodoos in Bryce Canyons, our sunrise tour by jeep in Monument Valley, the thunderstorm in the Bisti Wilderness, and the breathtaking Balloon Festival in Albuquerque in my previous posts: 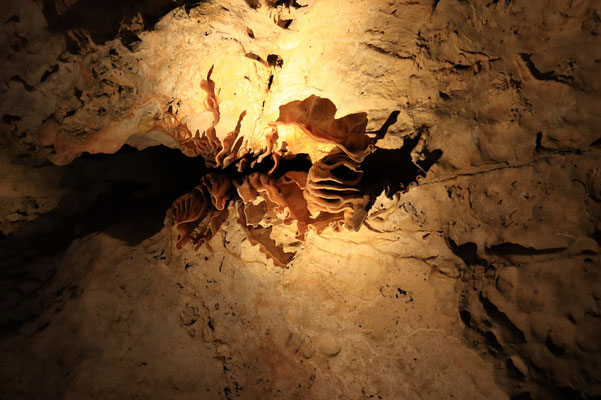 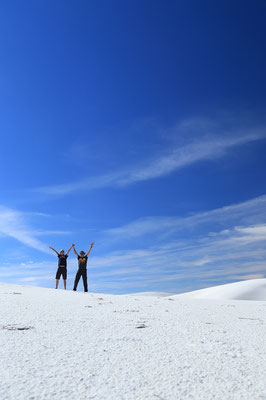 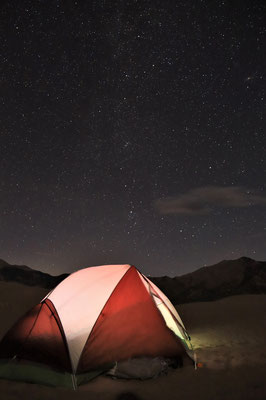 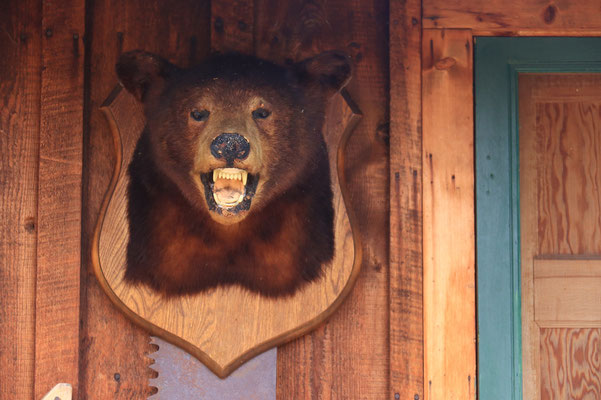