We are standing in a landscape full of craters and cylindrical towers of white rock. The golden-orange evening sun looms slightly above the horizon, darkening by the second. Powerful disks of blue clouds begin to encircle us from all sides, just like the oversized spaceships in Independence Day.

As if on an island, we stand next to our small red and white tent, whose rainfly is already shaking like dry leaves in a rising wind. We are in the middle of the Bisti/De-Na-Zin Wilderness, one of the most remote places in New Mexico. No houses, no running water, no electricity, no cell phone reception.

Then a woman adorned with a backpack walks quickly past us on her way to her car. In the distance, the first gleem of wet weather begins to waft through the ether, arriving quickly to the point where we stand.

"Are you sure your tent won't be washed away there?" she asks.

Here in the midst of the clay and stone desert, dry, barely discernible depressions can suddenly turn into raging torrents when the rain begins, even miles away. At the same moment, a brilliant purple flash shoots across the sky. The apocalypse is beginning. And we are in the middle of it.

In the second part of my travel report about our month-long road and camping trip through the Southwest of the USA, I take you to places of wild weather forces, a meaningful toilet at the Grand Canyon, and one of the biggest balloon festivals in the world.

Peeing at the Grand Canyon

Restless, I look into the treeless desert landscape, scattered with occasional patches of grass. We've been on the road for hours and I really need to go to the bathroom. But there isn't one. In the U.S., rest stops can be about as rare as intelligent comments on Facebook. We have already passed three restrooms. One was closed because of a construction site, the next because of Corona, and the third was in a private park to which we had to pay a ten-dollar entrance fee. Hello? Not even in St. Moritz have I paid 10 dollars to pee!

My boyfriend is amazed: "I didn't realize it was so close!"

I'm delighted, "I bet there's a bathroom there!"

And I'm right. As the mainstream of the crowd flows from the parking lot to the rim of the canyon, I make a dash for the WC. Finally.

Once that chore is accomplished, of course we also rush to the great precipice. Like a blue spaghetti noodle, the mighty Colorado River lies at the bottom of the red, stony, 230-mile gaping canyon, winding through the rock over a mile below us. We suddenly decide to stay for the night, we easily find a place to pitch our tent in the Grand Canyon campground. Then we hike a bit down into the canyon. It will be a small test run, because in our heads we have already begun to entertain the idea of hiking all the way down to the bottom during a several-day tour next year.

Bisti/De-Na-Zin end of the world

A few days later, under leaden clouds, we drive through a deserted landscape of clay formations and dust. We've crossed the New Mexico border and are on our way to a place with the mysterious name Bisti/De-Na-Zin Wilderness. The name comes from the Navajos and means Vast Area of Slate Hills and Cranes. The strange white formations dot the endless plain creating rock and clay formations that look like something between a moon crater and Michelangelo on coke. We don't see cranes. Nor do we see houses or people. We plan to stay two days and nights in the wilderness. Cell phone reception is non-existent or extremely unstable. We bring drinking water in a seven-gallon container. Electricity will come from our solar panels.

As we arrive just before sunset and quickly pitch our tent, a ring of dark blue thunderclouds begins to enclose us. After the hiker warns us of flash floods, we move our tent to higher ground. Then in the distance all around us the rain begins to pour as if being released from buckets in the sky and the lightning starts to flash ferociously in several directions.

"Do you think that was a good idea with the tent on the hill?" I cautiously ask my boyfriend. We sit under a tiny, corrugated steel-topped shelter and start to eat hot mashed potatoes that take on the temperature of ice cubes before the forks reach our mouths, while the wine is being blown out of our glasses by the wind as if we were in a Laurel and Hardy comedy sketch.

My boyfriend shrugs his shoulders and points to the torrents that suddenly begin to shoot through the lower levels of the landscape. I consider whether I would rather drown or be struck by lightning. Then I get my camera and try to photograph the thunderstorm. For seconds at a time, the pitch-black sky glows purple with electricity. There is thunder in the very near distance. We are suddenly in the middle of the storm. With a small tent in the wilderness. Wow.

The next morning a cool wind blows over the barren land. The rain is gone, the way from the tent to the car resembles the ground after a pig-wrestling contest. Clay, soaked by the deluge, sticks inches high under our shoes after a few steps. "I've got high heels!" I shout, just before I nearly fall flat on my face.

"At least we're finally not so short," my boyfriend retorts, just before he slithers down a hill.

After a breakfast of fried eggs and bacon—we are not really big meat eaters, but since the previous night was such a shit-filled experience, we felt we had to somehow celebrate our survival until the morning—we begin to hike into the wilderness. There are no marked trails, only geographic coordinates to take us to exciting formations. Using an offline map, we navigate for miles on foot over yellow, red, and gray boulders. We feel a bit like we are playing a computer game of cave-exploration. Then we see a pile of rocks that looks like the pipes of an church organ being played by a crazy octopus, cracked open balls labeled "Dinosaur Eggs" on the map, and finally huge petrified tree trunks that still look like wood, but have turned to stone. In between, we find round rock pillars with stone disks on top, and mushroom-shaped little knobs. It is an unreal world.

When we return, we meet two hikers who have also spent the night in the Bisti Wilderness—but in a motorhome the size of a cruise ship.

"Somehow it smelled like bacon this morning," they say, sniffing the air with hungry eyes. I shrug and grin.

Bucket List: Hundreds of balloons in the sky in Albuquerque

The real reason we chose to begin this 2,500-mile, month-long road trip through the southwestern U.S. is a big event: the Albuquerque International Balloon Fiesta. It is one of the largest hot air balloon festivals in the world. A place I have wanted to go for years, because one of the items on my bucket list is: “see a whole lot of hot air balloons in the sky at once.”

It's 3:20 in the morning when the alarm goes off. In manic anticipation, I ordered tickets for the Sunrise Session a few weeks ago. In doing so, I cleverly brushed aside the travel time to the festival site and the fixed 4:30am admission time. With only one eye half-open, I lean against my boyfriend in the shuttle bus while it's still deepest night outside.

Then we are on the event grounds. The field is wet, the air cold. I bought a stupid $5 cocoa because otherwise my hands would have frozen off. My boyfriend is an early bird (and a funny bird) and he jumps around excitedly between the souvenir stands. Slowly, more and more trucks drive onto the wide field. Square baskets sit in their trailers and on truck beds. We stroll between the cars and watch from all angles how the first teams spread their huge, colorful balloon covers on the ground. I had no idea that you get to get so close to the action. I'm almost as excited as I was on Christmas Eve and briefly forget that it's still only five in the morning.

All of a sudden, a huge flame hisses right next to us. Then another one. As darkness slowly begins to fade into the dim morning light, the first rainbow-colored giant hot air balloon starts to inflate next to us. This year there are about 600 balloons, in non-fuck-corona-years there are more than 1000. When the very first balloon finally begins to rise from the ground, glowing in the orange morning sky after a cold, long wait, the crowd around us cheers, and goose bumps are the order of the day.

One balloon after another start to take off. Often several at the same time. One of the balloons has an elaborate oriental pattern, another the slogan of the state of Montana, and yet another looks like Yoda, and then three penguins begin their ascent into the heavens.

We stand in the middle and watch the sky get bluer and more colorful at the same time. It is like standing in a cloud of soap bubbles. A childlike, magical moment that will remain in my memory for eternity.

"I've always wanted to see lots of hot air balloons in the sky at once," I say to my boyfriend.

He puts his arm around me, and replies, "And that's exactly why we're here now.”

The Albuquerque Balloon Fiesta takes place every year for over a week in early October. More reports and inspiration for beautiful road trips and sights in New Mexico can be found here: 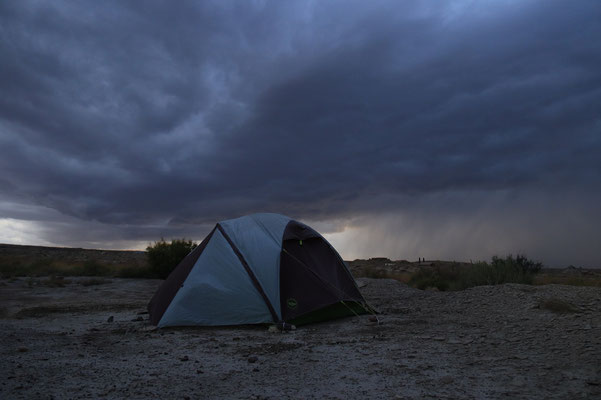 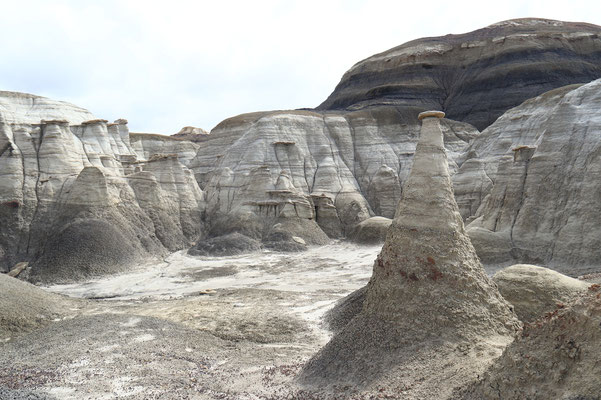 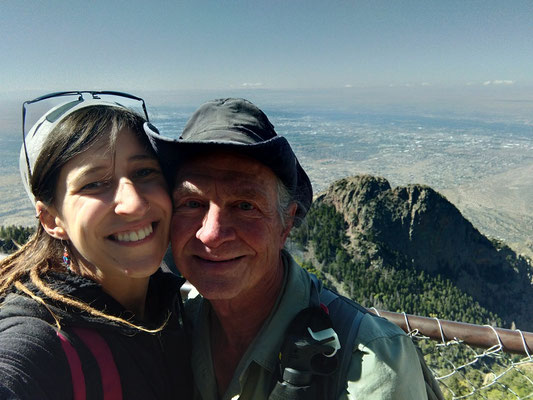 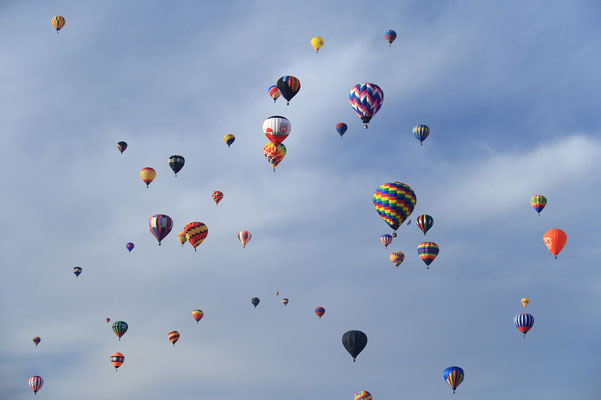