The large drinking water canister resting on top of the stowed back seats of the car is sloshing noisily, the plastic box with the gas stove is firmly tucked behind the driver's seat, and our 1,000-watt battery, rechargeable via solar panels, is humming in the footwell. We're on a 3,000-mile road trip through the southwestern United States. For a month. From Wyoming through Utah, Arizona, New Mexico and Colorado. With a tent and "off-the-grid" equipment, we can live like Mowgli, the jungle boy, for a few days. Who, strangely enough, managed without drinking water canisters and batteries.

In this first part of our trip report, I take you to dark red rock giants in Capitol Reef National Park, to thousands of orange hoodoos in Bryce Canyon National Park, to dancing dust in the surreal Lower Antelope Canyon, and to a breathtaking sunrise with stars in Monument Valley—in an open-topped, off-road vehicle with Bulldozer Harry.

Capitol Reef National Park in Utah is something like the Atlantis of the American national parks. Many have heard of it, but no one has ever seen it. What is it anyway—a Capitol Reef? Is it a reef lying with sea cucumbers at the bottom of the sea?

My boyfriend says that I "absolutely have to see" the park. And because I always want to "absolutely see" everything I have not yet experienced, I'm on it right away. Sea cucumbers and all.

As we approach the park, a dark red wall suddenly looms up ahead of us in the colorful landscape, looking like a huge sponge with vertical ripples. I almost drop my camera out the car window. "Just wait a minute, it gets even better!" says my boyfriend enticingly.

"Slow down!" I shout, staring at the red giants. Dead silent, they stand in the heat of the sun issuing a statement louder than thunder. And not a sea cucumber in sight.

In the coming days we hike a lot throughout Capitol Reef. To a massive rock bridge, which shines mysteriously in the evening light, as if illuminated by nature with hidden headlights. To the Grand Wash—a seasonally dry canyon (there is currently not any water nor sea cucumbers here) with unbelievably high, craggy rock walls that seem to squeeze together from both sides. And to Chimney Rock, a solitary rock that seems to grow out of the valley floor like a tower in a fairy tale. We plod up the adjoining mountain until we are level with the top of the rock. From up there, the entire Capitol Reef National Park spreads out like a miniature land of red Lego bricks. The road looks only as wide as a shoelace, the cars even smaller than house flies.

Why is Capitol Reef called Capitol Reef now? The first settlers in the region noticed the few white and round dome cliffs interspersed between the red giants and were reminded of the Capitol Building in Washington. Later, gold prospectors came and found stone "pockets" in a rock face where water had collected—for a length of 90 miles. This reminded them of a reef. Now we have all learned something!

The petrified visitors of Bryce Canyon

From Capitol Reef, we continue to Bryce Canyon. Here lurks the world's largest collection of hoodoos. Now this is not the thing where you stick a needle into a rag doll.

Hoodoos are thin, tall, oddly shaped rock needles that rise into the sky from the ground. Native American legends tell tales about hoodoos being fossilized humans. If they only knew that conspiracy theories are totally in vogue again right now!

We are lucky and find a camp spot directly in the national park itself. Then again, we're not lucky either, because Bryce Canyon lies about 8,000 feet above sea level and at the end of September the temperature drops to almost freezing every night. However, we start the night in a two-person, mummy-shaped sleeping bag and my boyfriend always turns a small heater later in the night.

After the wigwam is up, we hike down from the rim into Bryce Canyon on various trails. If you only stare down from the top of the rim trail, you haven't really experienced the national park. Especially magical is the Fairyland Loop Trail. Orange, white and partly pink hoodoos rise in endless rows in front of and beside us. The canyon walls are littered with hoodoos and sometimes we pass right through the middle of a hoodoo cluster. It does sometimes feel as if someone has suddenly frozen the visitors to a grand opera.

Speaking of freezing. Around midnight, I poke my nose out of the tent. Bryce Canyon has the Dark Sky Park certificate, which guarantees especially beautiful and undisturbed night skies. I will probably freeze to death before I can set up my tripod, but I must try. Then I notice that it is cloudy. Dark Sky—indeed. I pull my nose back into the tent.

Lower Antelope Canyon - that's not real, is it?

Our teepee is set up under the only artificially planted and reasonably large tree that the campground at Lake Powell has to offer in the scorching heat. Tonight, the forecast is 63 degrees. During the day, 95. If the propane stove fails, we will simply whip up a fried egg on the roof of the car.

It takes two and a half hours from Bryce Canyon in Utah to Lake Powell in Arizona. It's hard to get from the North Pole to the Sahara any faster.

But the trip to hellfire has of course a reason: Here is where the Lower Antelope Canyon lives, which is located on Native American reservation land, and it can only be seen with a tour.

As we walk towards the ravine with our guide at first, we see nothing at all. Just a flat plain of hot sandstone. Strange. Then suddenly, a narrow iron ladder appears, leading into an even more narrow crevice in the floor of the plain.

Lower Antelope Canyon is an underground masterpiece of nature. A canyon so narrow and winding that you often can't put both feet side by side. Red-gold light bounces against the sandstone walls, which have been shaped into waves by roaring flash floods after rare but heavy rains. It's like being in a maze of orange pudding. Dust dances like fireflies in the single, white rays of sunlight. Nothing about this place seems real, yet it exists.

The tour lasts over an hour with our inspiring guide, Xavier. The canyon is about 100 feet deep and Xavier shows us a video of what it looks like there during a flash flood. The moment I see the masses of water shooting back out of the canyon opening at the top, while standing at the bottom of the canyon at the same moment, is terrifying and beautiful at the same time. If you stand down here during a heavy rain, you won't survive.

with Bulldozer Harry into Monument Valley

"Holy Shit – we are going to see the sunrise in Monument Valley!", I shout as I dance around. We've just reached the valley of the brown rock gods between Utah and Arizona, and we've already booked an off-road-tour for six o’clock in the morning. To see the stars and sunrise. Since the "roads" in the Monument Valley Navajo Tribal Park consist only of sand and dust and we have already been stuck on a muddy slope in Costa Rica in the summer, we prefer to leave the driving to a professional this time.

The pro turns out to be a gnarled, 60-ish Navajo who rumbles into the parking lot at the visitor center in the pitch dark at ten minutes past six the next morning. He's a little late because he had to stop and take photos on his way. I can relate to that.

"You're riding with Harry," a young lady had just told us, looking a little strange. "He's... special."

Harry has hands like the shovel of a bulldozer and a voice like wood rasp. He speaks fluent irony and must have been to Monument Valley 90,000 times. Anyway, he thunders headlong into the rocky valley with us and his off-the-road truck without headlights, so that the meteorites just bang against the underbelly of the vehicle.

"He definitely knows what he's doing," I bellow confidently against the cold driving wind as I gaze up at the stars from the open car.

"Let's hope so," says my boyfriend tersely. He puts his arm around me. I feel like I'm Rose Bukater on the Titanic for a moment. Let's hope we die at the same time.

Purple and Gold in Monument Valley

Shortly after, we stop at a famous viewpoint overlooking the Monument Valley, where three rocks stand gigantically side by side like big fists. In the dark blue sky lies the first glimmer of morning, along with Orion and Jupiter.

"So many stars," I whisper for the umpteenth time on this trip. But Harry is in a hurry, because he wants to be at a very specific point in the park for sunrise. He shoos us back onto the vehicle like a grumpy eagle owl and rumbles once again into the darkness.

After a few minutes and a few herniated discs, we reach a dry flatland affording us a view of a series of pointed rock pillars standing out black against the golden morning sky. I've never seen blackness and contrast so clear. "Holy shit," I say.

Then wonderful flake-like wispy clouds move in, glowing red and pink, and the rocks around us turn purple. It's an explosion of color in one of the most magical places on earth.

After that, we smash back onto the dirt roads and near-roads in broad daylight and Harry shows us some historical petroglyphs. When we see him again later in the day as we return from a hike, he recognizes us, and waves.

All the big and small moments. Out here they are all infinite. 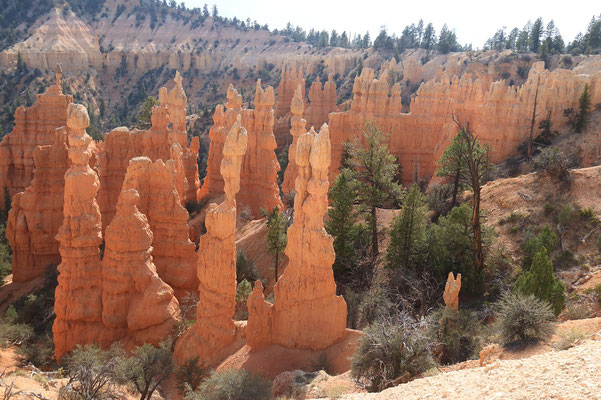 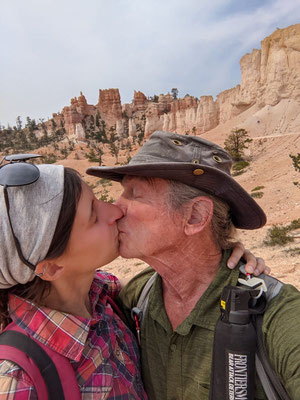 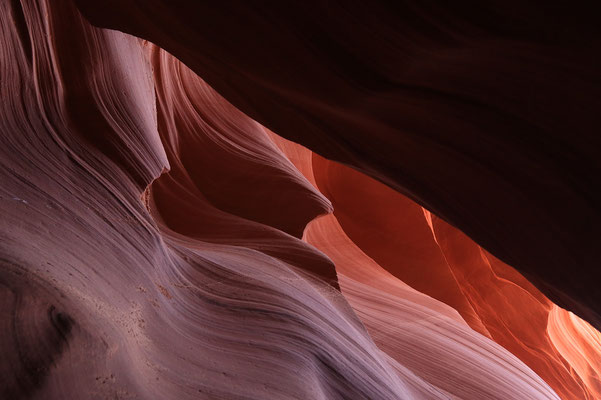 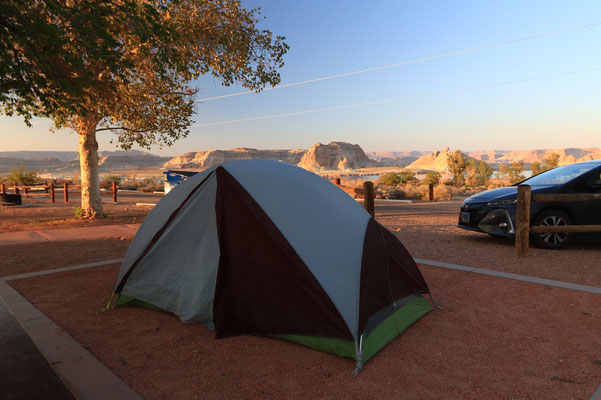