"Oha", I think, while I hold the silver carabiner in my hand and strange straps dangle loosely around my legs. "It's time to embarrass myself again."

My boyfriend and I are on a two-week road trip through Costa Rica. Ever since he had told me about his Zipline Adventure in Ecuador that he had taken long before we met, I cannot stop thinking about how it would be to soar on a thin cable high above the jungle.

The time has finally come. Almost frighteningly, I only understand about half of the attendant’s instructions as I stand on a tiny wooden platform that is higher than Mt. Everest and my mind drifts back to how I accidentally punched a volleyball into my 7th grade teacher’s mug because I am a total failure with hands and arms when it comes to sports.

How we managed this adventure, why we hiked 10 miles through the jungle in the scorching sun with 90 million percent humidity, what the gate keeper with the gun wanted, and where we found a little bit of Yellowstone feeling in the middle of the rainforest: these exploits are all found here in Part Two of my frenzied travelogue about our road trip through Costa Rica!

No laptop, no internet, and a volcanic eruption

I'm lying in the hammock at our Airbnb, frantically trying to send a Word document from my boyfriend's phone. A few days ago, my laptop decided to give up the ghost in the middle of a remote Caribbean peninsula and now the wi-fi at the Airbnb is down due to heavy rain. Unfortunately, I'm a digital nomad and freelance copywriter and right now I have to write an article for a client and send it out. Thanks, karma, I get it.

So now I am sending the text of the document I've written on my American boyfriend's tiny laptop via Bluetooth to his cell phone, which still has a bit of mobile data left, and I wave the phone wildly around the terrace in search of a signal. We seem to be at the very edge of reception.

After the challenge is over, I decide to relax and do a search for the next Costa Rican national park we want to see, Rincón de la Vieja. Suddenly, Google News is showing me photos of an ash-spewing volcano with the cheerful caption: "two days ago." I'm instantly totally unrelaxed.

"Look, that's where we're going tomorrow," I say, holding the news under my boyfriend's nose.

The Rincón de la Vieja volcano often emits ash. However, the latest eruption was the strongest in 25 years. "Is the national park still open?" my boyfriend asks, only slightly concerned.

I look it up. It is open. We drive there. After all, we just used up all the lousy karma.

Bubbling springs and the gate keeper

Just behind a huge tree with the three-foot-high roots that resemble dragons’ feet, the air smells suspiciously like rotten eggs. Rincón de la Vieja National Park not only has a volcano, but all sorts of thermal geological activity that go along with it: Fumaroles (gases and water vapors welling up from fissures in the earth), mud pots (bubbling, hot mud holes), and hot springs (boiling, colorful water sources that stink like rotten eggs because of hydrogen sulfide and other sulfurs).

We look out over the dark green tropical forest from which mysterious columns of steam rise. "This is Yellowstone in the jungle!" shouts my boyfriend enthusiastically.

We hike to orange-silver springs, a bubbling mud lake with yellow speckles that make it look like a giant fried egg, and yawning rock holes from which hot steam roars. Dancing as it rises, it gets divided between the reddish tree trunks which causes the steam to form individual clouds of sunlit and shadow-darkened stripes.

On the way back from the national park to the Airbnb our car rumbles down a narrow road filled with potholes, in the middle of which stands a barrier guard, a guy we have already paid early in the morning for passage into the national park. In addition to the entrance ticket.

"If we have to pay toll money here again, we won't go to the park a second time tomorrow," says my boyfriend, playfully grumpy.

"Then we'll just break through the barrier and speed away," I suggest.

"I don't know. The guy had a gun," my friend skeptically replies.

I glower. "Really?" Then I think for a second. "Maybe we can just pay whatever he says, drive slowly through the open barrier, and then race off!"

That would also mean that my career as a bank robber has just ended.

The next day we are back in the Rincón de la Vieja National Park, entering the Park only after we dutifully pay our 1,200 Colones—the Costa Rican currency—to the gate mafia. Which, by the way, is only about $2.

Because of the volcanic eruptions the hiking trails to the crater are unfortunately closed long-term. Nevertheless, in addition to the circular trek on the previous day, there is another path which leads to two hidden waterfalls. The three-mile trail to the first waterfall is rocky and steep. Fortunately, it's only 99 degrees and 90 million percent humidity. My boyfriend, as always, completely unimpressed by the climate of death, just tap-dances up the green hill between the reddish volcanic rocks, while I photograph an interesting blue bird and try to catch my breath. My face is bright red, my lungs are bursting and my eyes are burning. Fuck the waterfalls, yo.

When we finally arrive some 10,000 years later, I stick my face into the ice-cold turquoise water. I just don't care if some tropical crab comes and bites my nose off.

Then we picnic as our feet dangle in the water and for some unknown reason I say, "Let's go to the other waterfalls too."

Monkeys in the tree and a long walk

They are another three miles away. And the park closes at 3 p.m. We must hurry. So, we trudge through the jungle, thankfully not up a mountain this time. But I begin to wonder why I had the brilliant idea of dragging my heavy telephoto lens along today of all days.

When we arrive at the other fantastic waterfalls, plunging from sheer cliffs into a green pool, I find out. There is a rustling in the trees above us. Then I see the monkey. He seems to look down at us and wave. I start a paparazzi action. With the big lens.

But now we have to quickly leave so that no one locks us in the parking lot at closing time. We race back another five or so miles and I feel like I'm in the Gobi Desert. Our drinking water is almost gone, and I stumble more than I hike.

By the time we reach the car, there is only 10 minutes before closing, I'm almost crawling on all fours.

"I'll go get us some soda!" my boyfriend shouts cheerfully and disappears to the kiosk. I think he'll still be doing half marathons when he's 105. I, on the other hand, have just officially died.

Or maybe not, because otherwise I wouldn't be standing on this little wooden platform 20,000 feet above the jungle right now, wrapped in harnesses and carabiners, zipping on thin cables totaling more than 2 miles across the cloud forest on 13 lines.

We're in Monteverde, at Selvatura Adventure Park, where we're going on a big zipline tour. My boyfriend is already elegantly zipping over the first cable while one of the attendants hooks up my carabiners. I flail my hand around a bit pointlessly while not really remembering what I am supposed to do next.

Then the attendant dude gives me a gentle nudge, I yell "huuaah!" and I'm already zooming along the cable over the trees. Thinking I'll have to brake at the end, I hold onto the cable a bit awkwardly and stop completely, hanging in the air, almost ten feet shy of the next platform. One of the attendants says something I don't understand, because unfortunately I don't speak Spanish, but he grins. Probably it was “Look at that crazy cow!” Or something like that.

I don't care. Now I know how to do it, and it's just giganto-maniac fun to shoot on a thin cable over huge ferns, wisps of clouds, and purple flowers in dense treetops.

At the very end of the ziplines, another special feature awaits. The half-mile-long Superman flight. For this we don’t sit. We are strapped with our backs facing the cable and our feet in the air behind us so that we shoot along the zipline, leading with our heads and outstretched arms, like Superman. Just at this moment the fog thickens. As I push off the platform, I make a fist and grin. Then I dive headfirst into the white nothingness. "Holy shit!" I shout. Followed by, "What am I doing here?"

Just before the platform at the other end, I slow down a lot and stop—again—in mid-air a bit short of the platform. One of the attendants has to climb out to me to tow me in. My boyfriend is already sitting on a bench, waiting, and shaking his head. "I can’t take you anywhere," he says. Then we laugh out loud, and he takes me in his arms.

The next day we drive back to San José. From there we fly together to visit another one of my friends in the USA.

You can read more about the first part of our road trip through Costa Rica in the article Wild Caribbean, colorful toucans, and howler monkeys at night - Road trip Costa Rica I. 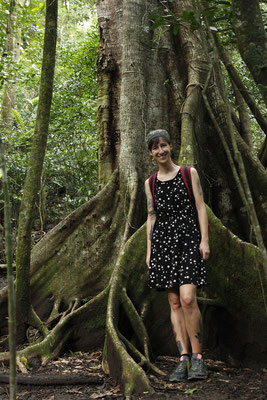 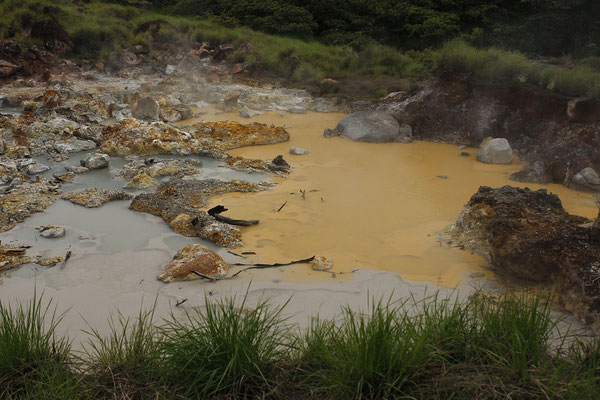 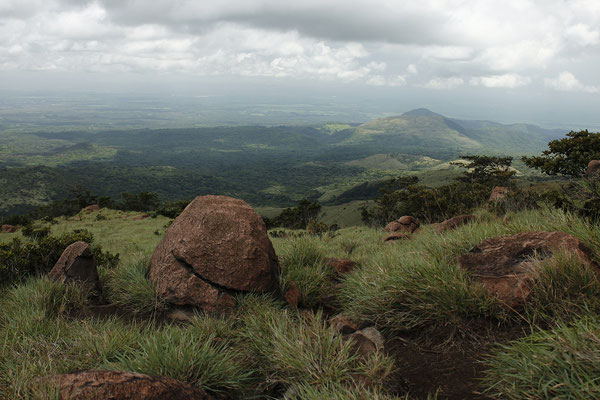 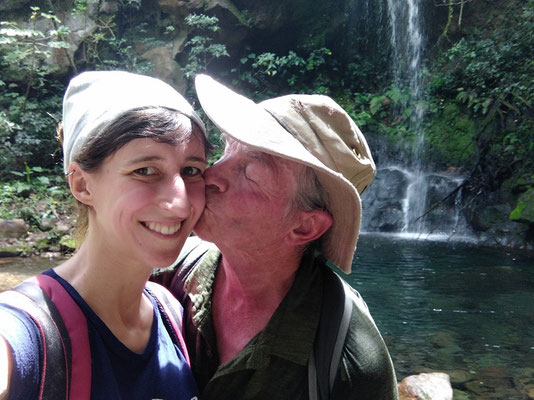